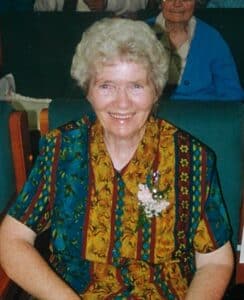 Bridget Josephine Kennedy was born in Athenry, County Galway, Ireland on 17 March 1926 to Patrick and Mary Kennedy. Bridget was the fifth child with older siblings Edward, Christina, Winifred and May; her younger siblings were Laurence, Patrick, Derek and Nancy. The Kennedy family lived on a farm at Gloves, near Athenry.

At twenty years of age, with her cousin Catherine Kennedy (later Sr M Patrice), Bridget travelled by boat to Australia, arriving in Rockhampton on 22 November 1946. A few days later, on 27 November, Bridget entered the Rockhampton Sisters of Mercy with her cousin and a young Rockhampton woman, Patricia Ryan (later Sr M Andrina) and they were received as novices on 26 July 1947. On 22 January 1950, these three young novices were professed together with Sisters Valerie Schleger, Anthony Mary Casey, Paulinus Scotney, Michael McRae (all deceased) and Angela Doheny.  At Profession, Gabriel chose the motto: Thy will be done!

After retiring from teaching, Gabriel was a Mercy presence and a valued member of the Meteor Park Conference Centre community (1992-2000). When the Centre closed, Gabriel moved with Srs M Geraldine and Bernadette Mary to a home in Kelly Street, to Loreto Convent (2002-07), then The Range Village (2008-19). When she needed extra care, Gabriel moved to McAuley Place on 8 July 2019 where she died very peacefully on 14 August 2022. Following her Funeral Mass, Gabriel was buried at the Memorial Gardens, Nerimbera. We pray that the quiet, faith-filled and prayerful spirit of Gabriel will rest in peace, in the company of her parents, her siblings and her many Mercy companions.

It is a great honour to share some memories of our dear Gabriel with you today. Who would have thought way back in 1950, in her very early days, when Gabriel was my teacher in Grade 2 at St Francis Xavier School West Mackay, that I would be standing here today remembering and thanking Gabriel for her many years of Mercy ministry in the Rockhampton Diocese?

Bridget Josephine Kennedy was born on 17 March 1926 to Patrick and Mary Josephine Kennedy in Athenry, County Galway, Ireland. She was one of nine children:  a sister to Edward, Christina, Winifred, May, Laurence, Patrick, Derek and Nancy. The Kennedys lived on a farm in a country area called Gloves about three miles east of Athenry. Over the years I am sure many of us have heard many a story of her happy, carefree childhood growing up on the farm and of Bridget often following her father around while he was preparing the soil for planting potatoes, turnips, sugar beet, wheat and oats. Playing in the fields with her brothers and collecting blue bells and making daisy chains were some of her favourite pastimes in her younger days.   She was a country girl at heart. In 1946 Bridget accompanied her cousin, Catherine Kennedy on a journey to Rockhampton to join the Sisters of Mercy along with Patty Ryan on 27 November 1946. At their Reception ceremony on 26 July 1947, Bridget received the religious name of Sr Mary Gabriel, with Catherine Kennedy becoming Sr M Patrice and Patty Ryan, Sr Mary Andrina.  On their First Profession on 22 January 1950, Gabriel, Patrice and Andrina were joined by Scholastica, Paulinus, Michael, Catherine Mary, Angela and Anthony Mary. They were often referred to as “The Nine”.

After First Profession, Gabriel began her teaching career across the Diocese beginning with many years in the Mackay area, including West Mackay, North Mackay, Marian, Walkerston and South Mackay.   Other postings for Gabriel were at Springsure, Theodore, Barcaldine, Gladstone, St Therese’s Rockhampton and St Mary’s North Rockhampton. Gabriel was House Mother at St Joseph’s Neerkol in 1975 and was also one of the last Sisters at Neerkol, known as Meteor Park Conference Centre, from 1990 until it closed in 2001. As you can see Gabriel travelled extensively across the Rockhampton Diocese.

Gabriel was a gentle, loving, happy, softly spoken, quiet achiever. She was a no fuss person who had a great sense of Irish humour and enjoyed sharing stories about her life back home on the farm, not forgetting her mentioning that there was a song about Athenry. During her teaching years, Gabriel often shared about the privileged times she had in preparing children for First Confession and First Holy Communion in her earlier years.

While living in retirement at the Range Village, one could set the clock each afternoon for Gabriel, the lass from Galway, seen either walking around the grounds of McAuley Place praying the Rosary or heading to the Chapel for prayer.  Gabriel’s great love of the Eucharist often drew her to be present before the One she loved so faithfully. Gabriel had a beautifully simple but deep spirituality and was an inspiration to many through her faithfulness to her prayer life.  She truly lived out her Profession Motto “Thy Will Be Done” repeatedly.  She enjoyed pottering around her collection of pot plants and sharing humour or having a chat when paths crossed. She often referred to herself as “Gabriel the Archangel.”

Gabriel, we thank you for your faithfulness and love and for the many lives you touched over 75 years in Mercy Ministry with us in the Rockhampton Diocese. May I conclude with a prayer from your Irish heritage which you shared with us in our “Kaleidoscope of Rocky Mercy” which was published as we ended our time together as Rockhampton Mercies in 2011.

May the road I travel lead me to see the face of Christ in those I meet.
May the paths that I cross bring love into the World.
May God, our hope and our strength fill us with peace
as we travel our journey together towards Eternal Life.
May Christ be our shepherd and guide as we walk our journey of faith.  AMEN.

Gabriel, may you rest in the loving embrace of our God of Mercy and enjoy the reunion with the Kennedys of Athenry and your Sisters from your Profession Group. Rest in Peace Gabriel and thank you.