Most Reverend Michael Fabian McCarthy was announced as the 10th Bishop of Rockhampton by Pope Francis on 10 March 2014.  His Episcopal Ordination was celebrated at St Joseph’s Cathedral on 29 May 2014 with the Papal Nuncio and Bishops from across Australia in attendance.  The Cathedral was overflowing with family, clergy and members of the congregation from the Diocese and further afield.  People also joined in electronically, with his Ordination being the first major event live-streamed over the internet from St Joseph’s Cathedral. 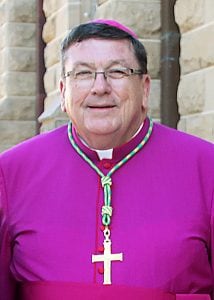 Born in Toowoomba on 13 September 1950, the son of Fabian McCarthy and Rita (nee White), and brother to Peter, Bishop Michael spent his early years on the family dairy farm at nearby Greenmount. He received his primary education at Greenmount State School and his secondary education at Downlands Sacred Heart College in Toowoomba before completing studies for a degree of Bachelor of Applied Science at the Queensland Institute of Technology, Darling Downs (now the University of Southern Queensland). He held a research position with BHP in Newcastle from 1971 until 1975.

Bishop Michael entered St Paul’s National Seminary (a member institution of the Sydney College of Divinity), graduating with a Diploma in Theology in 1978. He was ordained as deacon at St Michael’s Church, Daceyville in 1977, then as priest at St Stephen’s Cathedral in Brisbane in 1978. He continued his tertiary education with a Certificate in Tribunal Practices in 1986 and at the University of Queensland, from which he graduated with a Master of Arts (Studies in Theology) in 1998.

He served as Associate Pastor first at St Patrick’s Parish, Gympie until 1983, then at St Vincent’s Parish, Surfers Paradise until 1985. He was appointed as Director of the Pontifical Mission Societies and Director of the Catholic Immigration Office for Migrants and Refugees until 1990.

Bishop Michael served as Director of the Formation of the Clergy (1995-2000) which was followed by appointment as Rector of the Holy Spirit Seminary (2001-2008). He has served on the Regional Matrimonial Tribunal from 1983.

His appointment to the Episcopacy as 10th Bishop of Rockhampton by Pope Francis was announced on 10 March 2014 with his Episcopal Ordination being celebrated at St Joseph’s Cathedral on 29 May 2014.