As physical encounter with the very person of Jesus was no longer possible after Jesus had ascended to heaven, the Church was the chosen instrument of Jesus to provide that encounter.

At the preaching of Peter after the experience of Pentecost about Jesus, the people asked him “What must we do?” Peter replied, “Repent and be baptised” (Acts 2, 37). Thus, the people had to respond to the preaching about Jesus by their faith and change their way of life; the Church would then reach out to their conversion and share with them the life of Jesus, the Holy Spirit. This giving of the Spirit was expressed in the ritual of water baptism. Throughout the story of the Church in the New Testament we find this pattern repeated: the apostles preach, people responded and they were baptised.

Soon there emerged more details in this ritual of baptism. By the third century, the Bishop would preside over its celebration during the Easter Vigil with the three significant rituals – baptism in water, imposition of hands for the giving of the Holy Spirit and the celebration of the Breaking of Bread. Originally these three sacramental celebrations were celebrated in the same ceremony after an expended period of preparation. This wisdom has been restored to the life of our Church by the reform of the Second Vatican Council in the ritual of the Rite of Christian Initiation of Adults.

Today if an adult requested to be a member of the Catholic Church they would approach their local Catholic community and would be offered the on-going support of that community using that ritual to lead them to accept their place in the life of the community. Usually, this process would be celebrated at the Easter Vigil where they would be incorporated into the full life of the Church: baptised in water, confirmed in the giving of the Spirit so that they may be the Body of Christ.

However, this unified celebration became fragmented into three Sacraments: Baptism, Confirmation and First Communion. This came about because the Bishop who was minister of Initiation could not be present at all celebrations of initiation due to the growing numbers of people seeking to join the Church. So, the presbyters were allowed to preside over Baptism and Eucharist – later when the Bishop was available, he could celebrate Confirmation for them. Over time Confirmation emerged as a stand-alone Sacrament, without reference to Baptism or Eucharist. It even became common practice to celebrate First Communion before Confirmation. Fortunately, the liturgical reform of Vatican II has seen the restoration of the traditional order for the celebrating of Baptism, Confirmation and First Communion.

The current Sacraments of Initiation Booklet for the Diocese of Rockhampton can be found by clicking the following image: 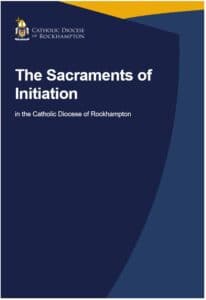