Josie Curran, an only daughter, was born on 23 August 1924 to Daniel and Gertrude (Allen) Curran in Gladstone. George and Daniel were older brothers to Josie, with a younger brother, Bernard, and Val, all of whom have predeceased Josie. 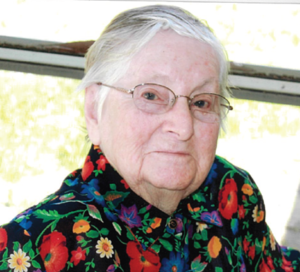 The Curran family were well-known and highly respected in the Gladstone community and within the Catholic parish. All the children attended Star of the Sea Primary School and Mr & Mrs Curran were generous benefactors to the local Sisters of Mercy. On Ash Wednesday, 1 March 1949, a disastrous cyclone struck Gladstone causing untold damage to homes and public buildings. Both the Catholic school and the Convent of Mercy were destroyed. Alternative class-room accommodation was found for the students but it was difficult to find suitable housing for eight Sisters of Mercy who were staffing Star of the Sea Parish School. For three nights, the Sisters slept at different family homes. A more permanent arrangement was made when Mr & Mrs Dan Curran generously vacated their home at 125 Toolooa Street so that the Sisters could live there and remain teaching in the school. The Sisters lived in the Curran family home for twelve months before moving to a rented house, closer to the school, until their new Convent was opened in May 1952.

Josie entered the Rockhampton Sisters of Mercy on 12 July 1943, was received as ‘Sr M Agatha’ on 18 June 1944 with Srs M Francis Regis Stablum and Mercedes Bailey. These three Sisters were professed on 2 February 1947. In her early years, Josie taught briefly at St Theresa’s School (R’ton) and Marian. However, nursing was her deep desire and Josie commenced her training at the Rockhampton Mater Hospital in 1946, continuing at the Mackay Mater (1947) and back to the Rockhampton Mater (1948-1953). From 1954 to 1957, Josie cared for the babies in the nursery at St Joseph’s Home, Neerkol, before moving to Bethany Home for the Aged in 1956 where she remained until 1977. While at Bethany Home, Josie cared not only for the aged residents but also for disabled women and girls for whom Bethany was ‘home’. In 1976, Josie had some time for spiritual renewal, then nursed at the Bundaberg Mater where she also became involved with Crossroads, a ministry of the Uniting Church. Though Josie finished formal nursing in 1983, she undertook volunteer work in the community until she moved to Gladstone in 1989 to care for her sick brother, Bernie, until his death in 1999. After Bernie’s death, Josie moved to Lota, to be with her nephew, Noel, and other family members.

At her request, Josie was interred at Nudgee Cemetery on 1 September 2022, in the presence of her dearly loved family members and Sisters of Mercy.

Greatly inspired by Catherine McAuley, caring has been at the heart of Josie’s ministry as a Sister of Mercy. In her own words, Josie wrote:

‘I spent many years of active ministry nursing at the Bundaberg, Mackay and Rockhampton Mater Hospitals. I also found fulfilment in caring for the needs of the elderly and for the women and girls with disabilities who lived at Bethany Home for the Aged in Rockhampton. It was a privilege to be involved with ‘Crossroads Christian Fellowship’, an organisation committed to improving the quality of life of people with disabilities, by offering them friendship and a chance to participate in social activities. I spent eleven years in Gladstone caring for my sick brother until his death in 1999. Since then, I have been living with family in Lota, Brisbane’