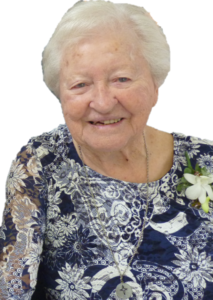 Joan Lucy Kinnane was born at Stanthorpe on 5 June 1923, the eldest of six children, to Robert and Sylvia (Neal). Younger siblings Vince, Gloria, Joy, Neal and Kevin have predeceased her. Because Mr Kinnane was a policeman, the family moved to various towns such as Dalby, Chinchilla and Toowoomba where Joan was educated. After completing secondary school at St Saviour’s (Toowoomba), Joan spent several years doing clerical work in Brisbane then entered the Rockhampton Sisters of Mercy in February 1946, being received as ‘Sister Anne-Marie’ on 11 July 1946 and professed on 23 January 1949.

Mother Mary Fabian Connell, then the Mother General of the Sisters of Mercy in Rockhampton, encouraged Anne-Marie to complete a social work degree with the intention of having a qualified consultant for the development of the various aspects of social work in the region. Anne-Marie’s final placement at the then Catholic Family Welfare Bureau in Brisbane shaped and confirmed the concept of a local Diocesan centre to offer similar services to families and individual people. In 1972, Anne-Marie completed a Bachelor of Social Work (Honours).

During ongoing consultation with Fr Frank Gilbert, with many steps, proposals and plans in between, the Christian Family Centre opened its doors in Rockhampton on 29 January 1974. Sr Anne-Marie and  Fr Frank were significant people in the development of this welfare service, previously known as ‘Centacare’, and now known as ‘CatholicCare’. The Rockhampton region has benefited enormously from Anne-Marie’s energy, vision, care and commitment to ensuring the community’s welfare. As a commissioner with the Australian Social Welfare Commission, Anne-Marie developed networks which provided various services for vulnerable people and families.

Anne-Marie held the position of Director of Centacare until 1989, after which she took up the role of resource person with an involvement in parish development, pastoral planning and social justice, first for Rockhampton Diocesan Pastoral Services and later at Rockhampton’s Mercy Administration Centre. Over the years, Sr Anne-Marie’s planning and facilitation skills were engaged, not only by the Sisters of Mercy, but by many local government, community and church organisations throughout Central Queensland and beyond.

At a graduation ceremony on 25 August 2016, Central Queensland University (Rockhampton) conferred an Honorary Award of Companion of the University on Anne-Marie. The University’s citation reads: ‘Sister Anne-Marie Kinnane has been an influential educator who has utilized her knowledge, skills, personal drive and leadership qualities to make connections and build strong relationships to support the Rockhampton region.’

Because of failing health in recent years, ‘Anna’ as we affectionately named her, was in care at McAuley Place and then Bethany. In her 100th year, Anna died peacefully in the Rockhampton Mater Hospital on Friday evening, 2 September 2022. May the strong and vibrant spirit of Anna rest in the loving embrace of the God she served so faithfully and in the company of those she loved.

When Joan Lucy Kinnane responded to God’s call to enter Religious Life, she began a journey that has touched many lives. Almost one hundred years ago, Joan was born in Stanthorpe; she was the first of George and Sylvia Kinnane’s six children. Because her dad was a police constable, the family moved to various places in country Queensland. Joan completed her secondary education as a boarder at St Saviour’s College in Toowoomba and it was here that Joan experienced something of the Sisters of Mercy and their charism. On leaving school, Joan worked in Brisbane in a variety of places. Of these experiences she said, ‘Those early working experiences in such a variety of situations gave me an introduction and insight into economics and the different modes used by organisations’.

Shortly after World War II, Joan had a ‘near death’ health experience causing her to reflect on the meaning of life. The Scripture quote: ‘What will it profit me to gain the whole world and suffer the loss of my soul’ kept ringing in her ears. She faced the question: ‘Should I join the Women’s Army or the Sisters of Mercy?’ Encouraged by her relatives, Sisters Annette and Barbara, who were Sisters of Mercy in Brisbane, Joan entered the Rockhampton Sisters of Mercy in 1946. At her Profession in 1949, Anna chose the motto: ‘Behold the handmaid of the Lord’.

Anne-Marie’s initial years of ministry began with teaching in primary schools, then later she moved into secondary schools. It was while I was teaching at the Range College in 1966 as a newly qualified teacher, that I first experienced her support and encouragement. At this time, the Congregation was aware of social changes affecting their ministries. Mother Fabian, then Mother General, in her wisdom, asked Anne-Marie to undertake post graduate studies in Social Work at the University of Queensland. Two pivotal events which motivated Anna to re-direct her focus were, firstly, her graduation as a Social Worker with Honours in 1972. Secondly, she was greatly influenced by the teachings of Vatican II. These two forces would take her Mercy journey along unchartered and innovative paths.

As the first qualified social worker in Rockhampton, Anna initially worked from a small office in McAuley House, near Bethany, in Ward Street. At the same time, a like-minded Fr Frank Gilbert was Director of the Lay Apostolate. Together, they collaborated and worked harmoniously to establish the original Christian Family Centre in a demountable building in the grounds of the former St Patrick’s School in Derby Street in 1974. From this functional and accessible hub, the disadvantaged, the homeless, the deaf, the hungry and our First Nation people received the care and assistance they needed. With the involvement of some Sisters, including Patrice Kennedy, Kath Hawley, Vera Harrison and Justina Bedford, Anna guided the development of the ministry we came to know as ‘Mercycare’.

By 1984, the Christian Family Centre became too small for staff numbers and the services it provided, so new premises were built in Bolsover Street, on the site of the former St Theresa’s School. At the same time, the Church was establishing Centacare Services in other states in order to respond to the ever-changing social needs of local communities. As Diocesan Director, Anna oversaw the renaming and setting-up of Centacare in other places such as Mackay, Bundaberg and Emerald thus enabling the provision of a wide range of services including parish pastoral renewal, psychological assessments, life-enrichment programmes, pre-marriage education, family crises accommodation, counselling and an apostolate to the hearing impaired.

In order to implement the vision of Vatican II, Anna designed a Renewal Program for Parishes which she facilitated in many places in our own Diocese, and then in the Dioceses of Cairns and Townsville. Although other processes have replaced these programmes, parishioners still recall and remember the experience. Anna offered wisdom to pastoral councils and held membership on numerous Diocesan committees, but most of all she enjoyed leading our Sisters in discussion groups.

Time does not allow us to elaborate on all of Anna’s involvement in numerous civic, governmental and ecumenical affairs where she willingly gave her time and expertise to community and social action groups and to mentoring graduate Social Workers and Counsellors. Her ability to network widely and provide services for vulnerable people and families has been publicly recognised. One notable occasion was in August 2016 when, in the presence of her family and Fr Frank Gilbert, Central Queensland University conferred on her an Honorary Award of Companion of the University.

For almost thirty years, during all of this ministry activity, Anne-Marie chose to live in Depot Hill, a low-lying, disadvantaged and flood prone suburb. She, together with the Sisters who lived with her, involved herself in community and church events. A weekly gathering of parishioners at 54 Wood Street, to pray the rosary and enjoy a cuppa, kept her in touch with the life-events of the neighbourhood.

To the family members present here today, and to those who are here in spirit, Aunty Joan loved her time spent with you. She enjoyed travelling to Brisbane to visit you, when she was able. With her adventurous spirit, Anna loved exploring new places along the way, for we never travelled the same route there and back. In some of her trips to Mount Isa with her friend, Sr Marie Geddes, they camped along the way, enjoying the open spaces and countryside. After a serious car accident in 1993, Anna was hospitalised for three months with spinal injuries. On recovery, she walked daily along the banks of the Fitzroy River, later along the pathways of the Botanic Gardens, and finally around the grounds of McAuley Place.

In our Catholic tradition, today, the 8th September, is the day that we celebrate the birth of Mary, the Mother of Jesus. ‘Behold the handmaid of the Lord’ were the words that Mary spoke to the Angel Gabriel. Anne-Marie chose these words as her motto on the day of her profession. Today, on Mary’s birthday, we gather to honour Anne-Marie, another ‘handmaid of the Lord’ who brought forth the presence of Christ and enabled so many people to experience fullness of life.