On Monday 4 April 2022, Sisters of Mercy gathered in St Joseph’s Cathedral with Fathers Bryan Hanifin and Andrew Hogan (a former pupil) to celebrate the Funeral Mass for Sister Betty Attard who died at McAuley Place (Rockhampton) on 29 March 2022.  Many family members travelled from Mackay for the occasion, including Sr Betty’s two surviving sisters, Stella Bartolo and Patty Borg and sister-in-law Bernadette Attard. Betty was predeceased by her older sister, Mary Vella, and younger brother, Jim. 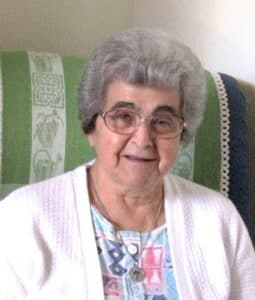 Beatrice Mary Carmela (known to us as ‘Betty’) was born in Mackay 2 February 1934 to Maltese parents, Joseph and Grace (Ellul). Betty was very proud to be named ‘Beatrice’ in honour of a dear friend of her mother’s. Growing up on a cane farm near Farleigh, Betty was part of a loving, faith-filled family and was educated by the Sisters of Mercy at the local St Brigid’s School, and later at the Range College.

At an early age, Betty heard God’s call to religious life. On 2 February 1950, her 16th birthday, Betty entered the Rockhampton Sisters of Mercy. Betty was received as ‘Sr M Tarcisius’ on 22 August 1950 and professed on 23 January 1953 with Srs Mary Stallard, M Julian McKie, M Geraldine Gregory and M Carmel Hynes. Betty chose the motto: Thy will be done! Saint Tarcisius, the saint after whom she was named, was known as ‘the Saint of the Eucharist’. Perhaps it was through his example that Betty developed her own love for the Eucharist. Fidelity to prayer and reception of the sacraments was paramount in Betty’s daily routine.

Sr Betty excelled as a primary school teacher, greatly respected by both parents and children wherever she ministered. On gaining her own qualifications, Betty enjoyed teaching Speech and Music and these personal talents shone very brightly when Betty prepared children for school concerts and eisteddfods. Pupils responded well to Sr Betty’s encouraging words which in turn, gave them the confidence to develop their gifts and talents. Undoubtedly, they quickly sensed the pride and joy Sr Betty experienced in being part of their formative years.

After retiring from teaching, Sr Betty continued to be a Mercy presence and a valued volunteer in Patient Services at the Rockhampton Mater Hospital (1996-2001), then at the Mackay Mater Hospital (2002-2007) and a part-time volunteer at St Mary’s School (South Mackay). When Sr Betty returned to Rockhampton in 2008, she lived at Loreto Convent and faithfully volunteered at St Peter’s School, readily giving of her time and teaching ability to the pupils who needed special assistance. When she needed extra care, Sr Betty moved to McAuley Place in 2018.

Sr Betty loved her family and as her many nieces and nephews married and had their own families, Betty eagerly awaited news of the next arrival. As well as this deep love and interest, Sr Betty had two other ‘loves’: she was an ardent Bronco’s supporter and relished the annual mango season. Sr Betty was both creative and artistic with crocheting being one of her favourite past-times. Family members have cherished her gifts of crocheted doilies and ‘fridge towels at Christmas time.

Following her Funeral Mass, Sr Betty was interred at the Memorial Gardens Cemetery, Nerimbera. We pray that the strong and caring spirit of Sr Betty Attard will rest in peace, in the company of her parents, Joseph and Grace, and her siblings Mary and Jim.