After completing two Principalships at St Kieran’s Mt Isa and Marian / St Stans’ in Rockhampton, Br ‘Rocky’ Rochford did a couple of short stints in Brisbane and Dalby & PNG before arriving in Bundaberg in 1988.

Rocky found his home in Bundaberg.  His journey here was not always easy.  Initially, Rocky was on the teaching staff at Shalom but ill health and a changing world made it clear that his days in the classroom were drawing to a close. Before the days when Campus Ministers became popular in Catholic Education, Br Rocky made that role his own at Shalom.

Brother loved routine and structure.  He was very much a ‘creature of habit’.  For many years at Shalom, he ran his famous ‘Snowy Trips’ by bus to the snowfields and Sydney. I am told that the organisation and minute by minute schedule rivalled the precision of the D-Day invasion.

Rocky loved Shalom and its students and staff.  He loved the local community and the members of this parish where he worshipped faithfully and daily. It is hard to overstate the impact he had on the Shalom community.  For probably thousands of young women and men his was the wrinkled but smiling face of God.  It was easy to recognise in him and perhaps probably more so even in his later years, a genuine authenticity and goodness – maybe even saintliness.

He was a companion to young people but in a low-key type of way.  He greeted hundreds every morning as they arrived at school with ‘Shalom, my friend’ and the response of ‘Shalom, Brother’ was just part of the fabric of life at Shalom for dozens of years.

His mornings were busy.  His day always started with prayer and generally Mass.  A simple breakfast followed and, for most of his years, before beginning a dangerous period when he drove to school, a ride on an antique bike to Shalom which enabled him to ready, early, for the day.

His journeying with the young women and men of Shalom started at the front gate.  On the famous small whiteboard which settled around his neck were written the names of students whose birthdays fell on the day.

He sought out and tracked down all of those he did not find before school and made sure that they received his congratulations on the anniversary of their birth and one of his famous book marks. Birthdays were a big thing for his and he left no stone unturned to ensure that he did not miss one. Remembering birthdays is not a remarkable thing or, really, of great significance.  But it was the little things that mattered to Rocky and I know that so many students at Shalom cherished being remembered by Brother on their day.  It was a low key action that had high impact. 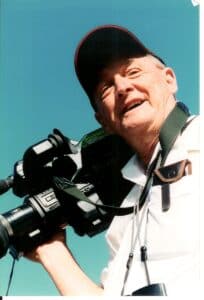 Shalom students had their lives chronicled by Brother.  He took about 3 million photos and almost as many videos.  He videoed them on their Orientation Day, their first day of Yr 8 or 7.  Then he followed their lives by attending almost every sport event, dance, Shalom Day, carnival or competition.  Always with his video camera or instamatic.  At appropriate times, Brother could be relied upon to share another episode of the ‘Rochford Files’ that were compilations of photos for retreats or graduations or other noteworthy event.  Rocky took the concept of a ‘family slide night’ to a whole new level!

When his death was announced, I read through a lot of the hundreds of comments on our FaceBook page.  It was clear that Brother’s time at Shalom spanned generations.

I wonder if our current students had any clue as to what earlier past students meant when they referred to Rocky as ‘Br Fuji’.  If the younger set present today still have no clue, ask someone with a few grey hairs.

Brothers’ gift to Shalom was one of presence.  He was just there. Quietly supporting and encouraging.  He never took a central role or demanded attention.  Like his hero, Edmund Rice, he believed in the transforming power of education and of the importance of walking beside those who need help the most.

Like Edmund, he had a particular soft spot for the battlers.  When Edmund Rice Camps came to Queensland, they rivalled the Manly Warringah Club for his affection.  Those Camps, where young people in high school and the couple of years beyond, give their time to ensure that a bunch of young people from really disadvantaged families, could have a great time for a few days, were his passion.

Because of his passion for Edmund Rice Camps, Shalom students have provided the backbone of the Eddie Rice Campers.  For years, he encouraged, nagged and cajoled Shalom Yr 11 & 12 students to travel with him to St Brendan’s Yeppoon to support the Camps there every Christmas.  And they did so in droves and willingly gave up their school holiday vacation time to be involved.

About ten years ago, he came to me with a cunning plan to continue to support the St Brendan’s Camp but also to run our own at our Outdoor Ed Campsite – Chaverim.  This has been a very significant initiative for Shalom and one he loved and supported.  He never missed one – ever. Through these Camps, he taught young people about Service Learning and about their responsibility to do something positive for those less fortunate.

He loved the Catholic community of Bundaberg and he wanted our Church to be welcoming and inclusive.  He loved Pope Francis and embraced the change the current Pope wants to see in the Church.

A story was shared with me from Deb Bolam, long time Shalom staff member and friend of Rocky.  On an earlier occasion when Brother had returned to Bundaberg after a serious battle with cancer, Deb asked him if he was afraid of dying.  He responded, ‘No because I’ve seen what heaven is like.  It’s like being at Shalom.’

On Monday morning last, at about 11.30am, he would have heard those words from his best friend, ‘Well done good and faithful servant.  Come and inherit the Kingdom prepared for you.”