In February, St Patrick’s Parish and the Emerald community farewelled a stalwart of the church and the Central Highlands district, at the requiem mass for John Maguire. Father Truc spoke to the close relationship that many of the clergy had enjoyed with the Maguire family, particularly John and Faye, as the Maguires and the priest’s presbytery had been neighbours for the last 36 years. John and Faye had not only been kind and hospitable neighbours, but they had also gifted to the parish the land on which the priest’s home is built. Fr Truc commented that moving from the priest’s earlier residence, now utilised at the Parish office, to the presbytery (appropriately called Maguire Place), has given the priest an opportunity to build a home, not just a place to live. The church was overflowing with over 500 people attending John’s service and many spoke of John’s gentle and generous spirit. He will be truly missed. May he rest in peace. 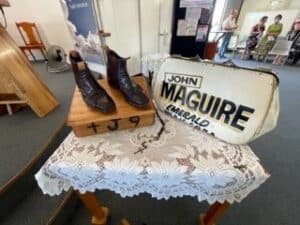