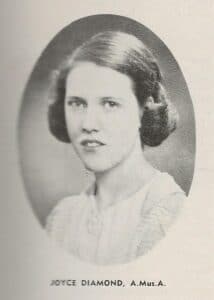 ss for Sister Mary Helen Diamond, a very dedicated and well-known Sister of Mercy who excelled as a music teacher. The Sisters were joined by Sr M Helen’s only surviving sister, Mrs Jean Griffin, together with Ross Griffin (nephew) and Judy Van Der Walt (niece) who travelled from Bundaberg for the occasion.

Joyce Winifred Diamond was born in Maryborough on 29 September 1923 to Edward and Emily Diamond, the second of four children with an older brother, Cliff, and younger sisters, Jean and Daphne. The family moved to Innisfail where Mr Diamond had a Newsagent and Drapery store and it was there that the seven-year-old Joyce attended the Catholic school and began music lessons with Sr Bernadine, a Good Samaritan Sister. The Mother Superior, Mother Aloysius, had been a close school friend of Emily Diamond’s when they both boarded at St Mary’s Convent, Charters Towers. In 1933, when Emily developed asthma and was advised to move to a dryer climate, the Diamond family relocated to Rockhampton, Edward’s birthplace.

The family home was in Glencoe Street, close to the Range College, which Joyce, Jean and Daphne attended while Cliff was enrolled at the Christian Brother’s College. Joyce continued her music lessons with ‘wonderful teachers’ including Srs M Cecilia Ludgate and Ambrose Gillespie, becoming an accomplished pianist, school choir accompanist and attaining qualifications that stood her in good stead for the many years in which she nurtured the musical abilities of countless young students in various centres. (Photo from Range College Annual 1941).

Joyce was also a competent typing and shorthand student, skills which equipped her for an office position at the then Rockhampton General Hospital after she completed the Junior Public Examination in 1940.  At twenty-one years of age, on 21 January 1945, Joyce entered the Rockhampton Sisters of Mercy. She was received as Sr M Helen on 14 October 1945 and was professed on 23 January 1948 together with Srs Margaret Mary Dendle and Mercia Hawken. Younger sister, Daphne (Sr M Leonie), also entered the Rockhampton Sisters of Mercy and was professed on 23 January 1952 but sadly died on 18 April 1963, aged thirty-three.

In 1981, Helen became semi-retired, moving to St Brigid’s Convent (Kent Street), then to Kenmore in 1988, and to McAuley Place in January 1996 as one of its original residents. An injured hip necessitated a move to Bethany Home in February 2016. Prior to experiencing immobility, Helen was the part-time typist in our Congregation’s Archives, where her secretarial skills were highly valued, firstly by Sr M John Mills and then by Sr Joanne Molloy.

Helen once wrote ‘I’ve always been a fun-loving person who has found joy in living life to the full. Music has been central to this joy and I’ve been blessed by many 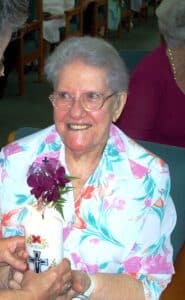 wonderful years of involvement in the appreciation, performance and teaching of music’. Fostering the arts, particularly music, was Helen’s passion and gift to the community. Helen was a fount of musical knowledge and willingly shared this gift with those who sought her assistance, mentoring musicians and aspiring music teachers to achieve their best. While encouraging the musical talent of countless young people and adults, Helen forged enduring friendships with these former students and their parents and maintained a close interest in their families till the end.

When a debilitating hearing impairment severely impacted on Helen’s life, it didn’t diminish her faith, her optimistic spirit, or her engagement with people; rather, Helen drew strength from her relationship with God, facing the challenge with courage, always grateful for kind gestures, the gift of each new day and the wonder of creation. Blessed with a keen intelligence, Helen embraced the advantages of modern technology to keep in touch with those she loved, to keep abreast of world affairs, to keep her mind alert and above all to maintain an avid interest in her much-loved sporting events. Though confined to a small bedroom in recent years and dependent on people for every personal need, Helen’s world was widely expansive and embracing of all: her treasured family, her Sisters, her friends, her carers and those who asked for her prayers. Some years ago, Helen reflected ‘I am encouraged by my belief that the acceptance of God’s mercy in my own life enables that mercy to be handed on to others’. This has surely been the pattern of Helen’s life. We are grateful for her faith-filled and faithful commitment to discipleship, lived in the compassionate spirit of our founder, Catherine McAuley.

Helen died so very peacefully at Bethany Home, Rockhampton on 2 January 2022, the Feast of the Epiphany. In the words of the poet, Gerard Manley Hopkins, Helen once expressed her heartfelt desire and we pray that this desire is now a reality for her:

In a flash, at a trumpet’s clash,

I am all at once what Christ is … immortal diamond.