For the past four months I have been gathering oral and documented histories of the Rockhampton Diocese from the near extreme boundaries of this vast diocesan territory – from Mackay to Bundaberg and out to Longreach and Isisford.

Thank you to the wonderful people of Mackay, Bundaberg, Longreach and Isisford who made me very welcome and shared wonderful stories of their faith journey and those of their family. I have many more kilometres to go!

Statistically the size of this one diocese in geographical territory is quite overwhelming. The diocesan territory covers 920,000 square kilometres. In comparison Ireland is 84,421 square kilometres – the difference being of course in density of population in the two countries. There are 26 dioceses in Ireland for this one diocese in Central Queensland. Until 1930, the Rockhampton Diocese extended much further north of the Tropic of Capricorn to Cape York.

The diversity in lifestyle and surroundings for the Rockhampton Diocese is vast, from the coast to inland. Mackay and Bundaberg are bustling regional cities with emerging industries. I was reminded of the vast social and cultural differences from going through several sets of streetlights in Bundaberg to conducting interviews in the quiet street of Isisford. As I left the town, I climbed into the wrong vehicle similar to mine to drive out of town – no one locks cars in Isisford. I had also lowered myself into the life of Isisford and had not locked my car!

For the past near 140 years the people of the Catholic Church of this diocese have struggled with isolation, vast distances and at times unforgiving weather conditions. The history I have gathered from its earliest days contains similar stories that I think have a present-day relevance to the present age. Both priests, people and at times travelling bishops made quiet adaptations for the place of celebration, for example to gather people around the Eucharist table. Many a Eucharist was celebrated around the family table because there was no church nearby.

Cocky (Henry) Bignell is a descendent of the Bignell family pioneers from the late 1800s of the Isisford region. He and Bignell relatives I met such as beautiful Billie Edwards and Betty Ogden carry in their memories the great commitment of the their families to the Catholic faith traditions. No less than two grandmothers with hats and handbags and faithful determination, collected little Henry Bignell every Sunday morning for Mass and returned to collect him for Benediction and any extra Masses!

He produced an antique well-worn iron and he described how his great, great, grandmother used it for the preparation of Mass in Isisford well before there was a resident priest there. 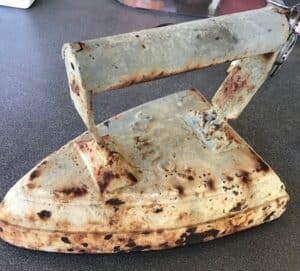