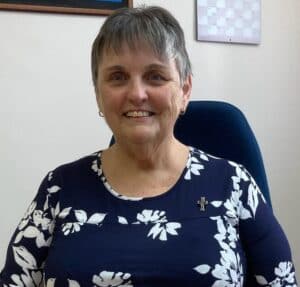 Prior to December 2011, there were 18 autonomous groups of Sisters of Mercy across Australia and Papua New Guinea. After much discernment and consultation, fifteen of these congregations chose to become one under the new name of the Institute of Sisters of Mercy of Australia and Papua New Guinea. The congregations of Brisbane, North Sydney and Parramatta chose to retain their autonomy with some Sisters from these groups choosing to transfer across to the Institute.  Given the much larger number of Sisters and the wide geographic spread, it was decided to divide the Institute into community groups.

At the end of February, I took over my role from Sr Bev Whitton after she completed her three year appointment. While I reside in Nudgee, Brisbane and have an office there, I have deep roots in the Rockhampton diocese. I was born in Bundaberg where I first began school at St Mary’s. My father and mother lived a roving life with Dad being transferred often in his work in the National Bank. I am the third of eight children and after a stint in Lowood, the family moved to Mackay where I completed my schooling from Year 4 to Senior at St Patrick’s Primary and High School, and then as one of the inaugural students at Our Lady of Mercy College. My last two years of schooling were spent as a boarder at St Patrick’s given my father had been transferred again where there was no upper se

After Senior I entered the Rockhampton Sisters of Mercy, trained as a teacher at the Capricornia Institute of Advanced Education and taught in many primary schools of the diocese. After some years of study in Melbourne, I returned to Rockhampton where I spent 11 years in pastoral care at the Mater Hospital. Following a term on the Congregation Leadership Team when Moira Truelson was leader, I worked in Sydney at the ISMA office. Once the Institute came into being, I returned to Coorparoo in Brisbane and spent five years working in pastoral care at Goodna Catholic Primary School. From there I moved to Rosewood to be of support to my ageing mother and following her death returned to Brisbane to live last year.

My role as Community Leader takes me from Brisbane to Cairns with just over 100 Sisters in my care. I am enjoying the return to familiar places and seeing familiar faces, even though I have been absent from the diocese for some time. I look forward to the times ahead and the opportunities provided to me and the Sisters to minister where we are able. Your continuing prayerful support is always appreciated.