The Feast Day which we celebrate on the 24th May has always been a very significant Feast not only for this wonderful country, Australia, but also for the Parish in which I grew up in at Park Avenue.

Mary Help of Christians was proclaimed Patroness of Australia by Pope Benedict XV in July 1916 and some thirty-six years later a newly rebuilt church in Park Avenue was opened and blessed in June 1952 and placed in the care of Our Lady Help of Christians. The original church on this site was dedicated as The Church of the Epiphany and was opened in January 1924.

Just a few years later in January 1929 the first Sisters of St Joseph arrived in the parish. Sister Grace was superior and with two other sisters they moved into the newly built convent which was directly behind the church on Lauga Street. The school building which had been moved down from Mount Morgan was adjacent to the convent and the new ‘St Joseph’s School’  opened on its first day with seventy-five pupils enrolled. Mary Curran (later Dyer) was the first name placed on the roll.  There have been Curran relatives/descendants in St Joseph’s School from that first day right up until the present. As was the custom after the sisters took up residence and when attending Mass or Benediction or any celebration in the church the Sisters sat a few rows back from the front and all children would sit in front of them. Boys on the left side and girls on the right. Absolutely no misbehaving in Mass in those days!

As the parish grew there were some alterations made to the little church in 1938 to help accommodate the growing congregation. It was a growing area and the church on Park Avenue was one of a number of churches which made up the North Rockhampton Parish. Around the 1960’s the street name changed from Park Avenue to Main Street as the area was commonly referred to as ‘Park Avenue’. My parents and a number of others were threatened with a fine for not having changed their address on the electoral roll. They hadn’t moved house and were unaware it was their responsibility to officially change their address.

A priest would come from St Mary’s and occasionally from Wandal to say Mass at Park Avenue on Sundays. The mining township of Ogmore already had a its own church and in my own lifetime new churches were constructed in the communities of The Caves, Marlborough and St Lawrence, all under the patronage and various titles of Our Lady. Prior to this, Mass had been celebrated in people’s homes when a priest visited. The school at Clarke Creek became the venue for Mass in that community with an influx of families into the area with the Brigalow Development Scheme.  For many years the Park Avenue Parish serviced what was known as ‘the country run’.  Sadly these churches are no longer and have been decommissioned and disposed of.

It was in 1942, around the time of the fall of Singapore, that Park Avenue had become a separate parish with Fr Frank Hayes as the first parish priest. During the Second World War parishioners extended hospitality to many of the US Servicemen stationed in the area. Dances and other social events were well patronised and some of the money raised helped clear the parish debt. The cost to build the original church was £750. Many of the dances and other functions were held in the ALP hall which stood on the corner of Glenmore Road and Highway Street. Sadly the hall burned down in December 1968. Towards the end of the war as a ‘thank you’ to the parish for its hospitality and care the US Servicemen donated two larger than life size statues of angels holding electric candelabras which stood ‘guard’ for many years in the sanctuary on either side of the  altar. They ‘disappeared’ some time  close to and leading up to 1992 and when a thorough search for their whereabouts took place prior to the Parish Golden Jubilee Celebrations in that year the search drew a blank. The angels had ‘flown’ never to return.

In early 1949 Rockhampton was hit by an horrific cyclone which had travelled down the coast and to the south of the city and then it turned around and without the protection of the Berserkers hit the city from the south. Many homes and buildings were damaged or destroyed and the Church of the Epiphany did not survive unscathed. It was undermined and blown off its stumps. By this time Fr Foster Carew was Parish Priest. The school then became the parish church for a number of years. The classrooms were  rearranged as ‘church’ at the end of the week and returned to ‘classrooms’ on Sunday after Mass. The parish family came together and the rebuilding commenced using the shell of the original church but with the new structure somewhat larger than the original to cater for the ever growing congregation. Most of the work was done by just two tradesmen and I recall going on a ‘tour of inspection’ of the construction site with my aunt and Fr Carew late one afternoon. There was a large stack of timber inside in the body of the church and a collection of tins of paint in various sizes. The celtic cross which now stands on the roof of the church was resting on the pile of timber. Among the tins of paint was a good supply of bright red paint as when the church was furnished and readied for opening we now had the unique red pews which adorned the church for many years. A later refurbishment and extension in Fr John Grace’s time saw the seating returned to a more sedate decor.

It was a great occasion in 1952 when the building was finally ready and the blessing and opening of the ‘new’ church with the name change from the Church of the Epiphany to Our Lady Help of Christians and with Bishop Tynan presiding on the day. Various school children and the young women in their ‘Children of Mary’ regalia formed a guard of honour.

Over the years one of the sisters would act as sacristan and I and many of my contemporaries assisted as we swept, mopped, polished, cleaned brass, washed, ironed and set vestments and did many of the tasks to keep our parish church to a standard befitting the House of God. Sodalities were very strong and each Sunday celebrated a different sodality; Holy Name Society (men), Sacred Heart Sodality (ladies) Children of Mary and aspirants (in their blue and red cloaks), children’s Sunday and if there was a fifth Sunday in the month it was celebrated as Family Sunday. Benediction on Sunday evenings and Novena to Our Lady of Perpetual Succour on Thursday evenings. For many years a picture of Our Lady of Perpetual Succour which had been blessed by the pope in Rome and placed  in a lovely silky oak frame hung in pride of place near the altar of repose. This altar was to the right of the church near where the organ now sits (before the wall was extended out further again) and where the Blessed Sacrament was kept when the main altar and sanctuary was stripped on Holy Thursday evening.

There have been many wonderful celebrations in this sacred space; the reception of the sacraments from Baptism, Reconciliation, first Holy Communion, Confirmation, Marriage, the funerals of loved ones and many other significant events. As school children we would at times sing in a choir for weddings from the loft at the back of the church. It was only after Vatican II that the organ and singing moved down into the body of the church.  The nuptial Mass was usually on a Saturday morning due to  ‘fasting’ for Holy Communion from mid-night the night before.  No doubt there was many a bride and wedding guest feeling quite faint before the Mass was over.

There have been three celebrations of Life Vows as religious sisters in this church. Diane Rowan as a Sister of Mercy and Annette Arnold and myself as Sisters of St Joseph and all three of us were present at the Mass on this year’s feast day celebration.

It was so lovely to see the entire school cohort gathered in the parish church for the first time in two years and to hear Mr Fitzgerald draw the connection between Mary, Jesus’ mother and Joseph, Jesus’ foster father and the circle of care. The participation of the children and the gusto with which they sang was very uplifting. Grateful thanks to all who helped prepare the children and the liturgy.

It is significant that the Feast of the Patron of Australia was proclaimed in the midst of the Great War. That Our Lady Help Of Christians is also called to watch over our service personnel as patron of the Australian military chaplains is no accident.  Neither is it insignificant that on this day we pray through the intercession of Our Lady Help of Christians for peace where war is displacing and destroying lives and property.

There was a time when the feast of Australia’s patron was celebrated with a cathedral full of faithful and as a child on another occasion I recall celebrating this great feast in a procession with people grouped in the various sodalities within the gathering of hundreds at the show grounds. The memory of this, though, is now becoming rather dim. 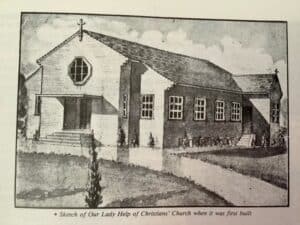 There have been many  significant pastors in the parish. Those already mentioned as well as  Fr John Leahy who had the foresight to form a trading co-operative and credit union which flourishes to this day albeit in a very different form. A man well ahead of his time and sadly taken from us before his time! Fr Con Daly who served for a short time in the mid 1950’s when Fr Leahy took ill and who returned much later as parish priest. This slightly eccentric Irish born priest was loved and revered by not only his Catholic flock but by his many ‘friends’ from all walks of life. The church remained open till 9 pm each evening as he prayed or welcomed those who sought him out. Sadly he died in a traffic accident just metres down the street from the church while out on visitation.  The various assistant priests who have served. One, Fr Noel Milner, who returned as parish priest. The parish logo on the banner that hangs in the church was commissioned by Fr Karel Duivenvoorden in his time in the parish. And to the many other unnamed priests who have ministered in the parish over the years we owe a great debt of gratitude.

The parish and church of Our Lady Help of Christians has a very proud history from its early humble beginnings. There are many people on whose shoulders we stand and whose contributions are now mostly only recognised and known in God’s eyes. The people who turned towards Our Lady Help of Christians for support and protection, and who joined together as a rich and vibrant faith community. If only the walls could talk and tell the real and full story of the last ninety eight years since the first church was built on this site and the last seventy which have been under the patronage of Mary, Help of Christians.

Our Lady Help of Christians. Pray for us.