Home/Stories/News from the Capricorn Coast

News from the Capricorn Coast

First up we must congratulate Fr Andrew on obtaining his Licence in Canon Law. A lot of hard work and time invested, while running a Parish along with his other duties as well. And still he keeps smiling!! We truly appreciate all your hard work Fr Andrew.

Our two monthly ‘Meet in the Middle’ was held on August 8th.  Both sides of the Parish come together for a social gathering where we meet and greet those we may not know and those we know well. All are most welcome.

36 primary school children and high school age children received the Sacrament of Confirmation on July 22nd at Sacred Heart Church. These children received the Sacrament of First Eucharist at either of the three Masses held at Mary Immaculate Church or Sacred Heart Church on Saturday or Sunday. Congratulations to you all and your families, and we pray God will bless you and lead you in your continued walk with Him. 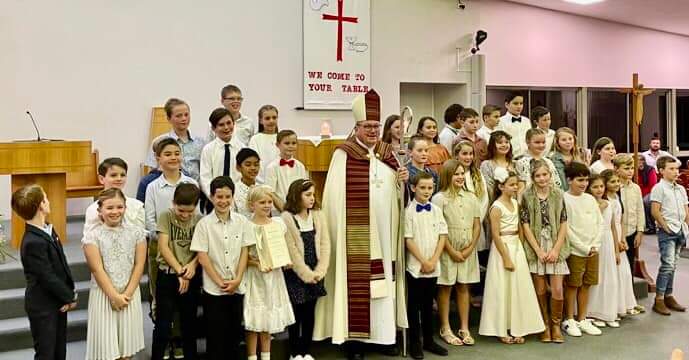 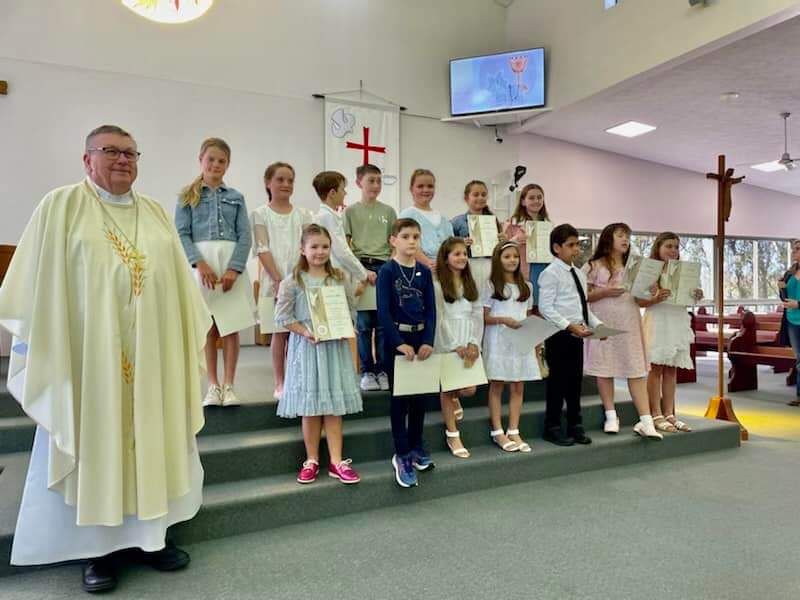 It was a privilege to attend this Mass at Holy Family Church, North Rockhampton. We gathered to say thank you to our priests who were celebrating significant Anniversaries. The Rite of Admission to Candidacy was also held for Peter Doherty and Grant Sutherland. This is where Bishop Michael formally recognizes their journey to priesthood. We pray for God’s blessing and guidance upon you both.

What fantastic talent we saw performing in the musical ‘GREASE’.  A great night of fun and toe tapping, as we had to stop ourselves from jumping up and dancing and singing. Well done to all involved in making this happen.

In the past month, we have mourned the loss of some significant people in our parish.  Here we honour two: Marie Downing and Maureen Eddyned.  Elsewhere in this newsletter is a tribute to Paul Worthington.

Marie was born 21st June 1936 to parents Leo and Myra Collier of Allenstown, Rockhampton. Marie had an older sister Clare and a younger sister Kath and a brother Bert.

Marie became a teacher, but had a break to have a family with her husband Allan. After this, she resumed teaching at St Joseph’s Wandal and relieved at various other catholic schools across Rockhampton.

When Allan retired from Telecom, they relocated permanently to Emu Park in 1991. Marie really loved the seaside lifestyle and enjoyed her daily swims. Marie and Allan were very much involved with the Mary Immaculate Church and the Capricorn Coast Parish.

Marie had a deep faith, love of God, family and her fellow man. This love had Marie volunteering as a catechist at Emu Park State School, a Proclaimer of the Word at Mass and also worked on the parish committee. Marie ran the church’s morning teas (making sure all the cup and saucers were matched perfectly) and organised the interdenominational World Day of Prayer with the other churches. Marie put her love of sewing to use making the altar cloths, tabernacle curtains, various Priest’s stoles and the current Pall. Marie also took part in cooking and catering for Sister’s and Priest’s retreats at The Haven.

Marie had a love of cooking and baking which I have heard she shared with many people who may have just needed a helping hand or kind gesture.

Rest in Peace now Marie, you have earned your heavenly reward.

Maureen was born in Donegal in 1934, the third of eight children, to whom she remained deeply attached throughout her life.

As a young woman Maureen entered the Columban Missionary Order, and eventually became the Principal of a very big Girls High School in Manila, Philippines.

After she had left the order and married, she moved herself and Eric to Tennant Creek and taught there for a number of years. Eric remembers her saying that before he was born she stood on the beach at Yeppoon and promised herself she would retire here. Her dream came true when she joined the staff at St Ursula’s College in 1985, after a year or two at North Rockhampton High.  Brian Kehoe was principal there at that time and this began a close friendship with him and his wife, Cath.

Sr Marion remembers Maureen as, “A born teacher. I would say the most creative teacher on the staff.” She was the Religious Education Co-ordinator, and rewrote the programs for all levels.

Maureen had an amazing capacity for joy and for friendship.  In any conversation, she was so positive that she drew you in to her vivacious outlook on life.

In the final years of life, she was cared for at Sunset Ridge in Zilzie.  She couldn’t speak highly enough of her care there, saying she was so happy.