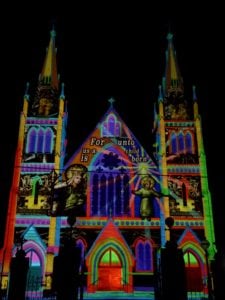 The lights of Christmas are returning in 2018.

Following the success of last year’s production, which saw more than 20,000 people come along, Rockhampton is ready to do it all over again.

Lights of Christmas Organising Committee Member, Father Bryan Hanifin said that this year year’s show would be bigger and better than last year.  “We have a a new feature story – The Night Before Christmas – and a new slide show which will build on the Christmas spirit of the whole region”.

Father Hanifin paid tribute to the supportes of the Lights, who include Rockhampton Regional Council, Catholic Education, The Cathedral College, Swanwick Murray & Roche Solicitors and GEM Energy.  “Without these fabulous businesses and organisations the Lights of Christmas couldn’t happen.”

It was a hit with young and old in more ways than one, as the old – St Joseph’s Cathedral built in 1894 – played host to the amazing new cutting edge technology that allowed the illumination of the Cathedral.  The Lights will again feature the beautiful and historic stained glass windows of the Cathedral in the telling of the Christmas story.

Nationally recognised company, Illuminart, have again been engaged to produce a show that will amaze all who see it.  The event had recognised them by awarding them winners of the Australian Event Awards held at the Sunshine Coast in November last year.

Last year’s event proved that Rockhampton region can match what happens in the capital cities.