On the 15th August this year Sr Noreen from the Gladstone Parish celebrated 50 years of living her vowed life as a Marist Missionary Sister.

When discussions first began concerning the celebration, the subject of a jubilee cake arose.  Sr Noreen’s immediate response was  “ We won’t have a big white fluffy cake.  My 50 years as a missionary is not well  represented by A BIG WHITE FLUFFY CAKE! “

When asked what she would like as a gift for her jubilee, Noreen  said she would like to offer to the people of Gladstone parish the opportunity for some times of quiet reflection and retreat. So three events were planned.

These events were organized by a wonderful team of parishioners co-ordinated  by Mr Graham Lindner and together they worked with such diverse groups as the Lions Club who did the barbecuing for the night and the EBITS from Tannum High School who provided servers for the meal. Congratulations to all concerned.

The third event was the Mass followed by a meal held at Tannum Sands.

Bishop Michael, presided at Eucharist and the priests of the parish, Frs Andrew and Ashwin concelebrated. They were joined by Fr Paul Mahony, a Marist priest, who had been parish priest in Gladstone when Sr Noreen arrived there.

During the Mass, six Marist Missionary Sisters renewed their vows. 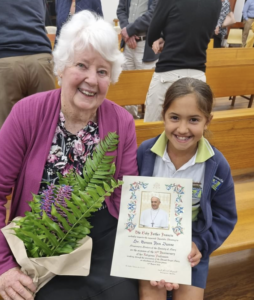 This renewal had a profound effect on the congregation as many had not ever been present at a religious vows ceremony. And of course having six Marist Missionary Sisters together was itself a momentous occasion.  As   “ad gentes”, that is overseas, Missionaries they generally live in small isolated communities and on the night of the 15th August, they were the largest community gathered in the region. What joy!!

And as the NOT BIG WHITE FLUFFY CAKEs were cut, the sisters sang in the words of St Paul:-

I thank my God each time I think of you and when I pray for you, I pray with joy.

It was truly a joyous occasion and further laughter ensued when a slide show presentation of This Is Your Life was presented to Noreen by the sisters.

I am truly grateful for the people who have come into my life and shaped and reshaped its journey over the last 50 years. I feel so blessed and give thanks for the faithfulness of a loving God.

This is the day that the Lord has made:

Let us Rejoice and be Glad!