I was quietly watching TV news last night when one of the Woori locals phoned me asking if I was “alright?” She alerted me to the danger that the old café house next to the church was on fire!

Just as I was going out to check on it the police came to evacuate me. The flames were sky high. Police cars and locals everywhere but no fire brigade.

I was really worried that the church might catch alight, but there was no wind and the big green trees along the fence line gave some protection. Thank God the building collapsed inwards, bringing the fire in on itself and away from our fence.

Our trusty Woori fire truck eventually arrived but I don’t think it had any water!!!

The brigade from Baralaba, 40 mins drive away, turned up after an hour and hosed down what was still ablaze.

Church attendances on Sundays have been really poor in recent months. It gets discouraging when you spend time preparing the church, the hymns, a meaningful homily and morning tea. On Sunday one adult came  who comes once in a blue moon dragging her  11 year old nephew staying with her (after chasing him down the road to get hold of him😊) as she wants him to make his First Holy Communion. His face was like a thundercloud and I really felt for him!

Then there were five more children aged between five and ten years old, all keen to have morning tea afterwards!

I tailored the shortened service etc to their ability to understand and participate. No responses at all from the adult, but she did come alive at the homily when I told a fairy tale which highlighted the Gospel. The reluctant nephew also looked interested.

I locked up after morning tea feeling rather down and asking God whether to continue with it all.

The people who gathered to watch the fireworks last night asked if I was OK.

The kids all came up and asked if I was OK.

The Fijian security guard for the hospital came to ask If I wanted a lift over to the nurses quarters.

Last night and this morning  I had phone calls from locals in the community asking if I was OK.

Everyone seemed so concerned as at first it had looked as if the church was on fire.

Today everyone is waving as they drive past and others stopping to ask the same question!

Yesterday at our local Post Office after I had been chatting with one of the Woori men he gave me a bear hug and said, “You can go home to your family, but remember this is your home and we want you back.”

Today a lady from the AIM church ( Aust. Inland Mission – Baptist I think ) sent me a photo she took of the fire last night. She is convinced she can see a lady in white with a white veil on her head hovering above the ground close to the church, pointing to the big cross we have in the front of it. AND she sees an “evil” face in the flames looking angrily at the white clothed lady who she thinks is Our Lady. That’s now doing the rounds with the message that Our Lady was protecting the Catholic Church 😊

I told my AIM friend I can’t see all that in the image but I was praying that God would protect the church. Who am I to say that Jesus didn’t send His Mother ! You never know, Mass this Sunday may be better attended!

I’m left feeling encouraged and much affirmed with no notion of retiring any time soon! 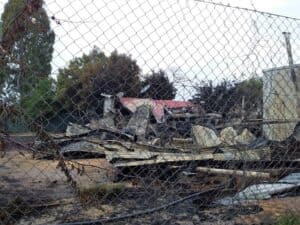