After travelling two and half hours on the Charters Towers Road to get to ‘Llanarth’ to celebrate Eucharist with Terry and Ros Kenny and family, this is the view that greeted us when we arrived. 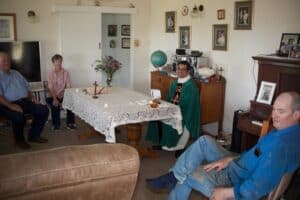 Once again Father Jomon was able to celebrate Mass at another property scattered around Clermont, the date being 31st August.  When we travellers arrived we were greeted with a cuppa and after chatting and catching up we all settled down in the dining room to celebrate Mass.

After Mass, lunch was served on the verandah where more catching up took place.

Before we left for Clermont, Terry led us up the hill behind their house to where a cross has been erected. This is in thanksgiving for all the gifts the Kenny Family have received and in remembrance of their young son who died.

We said our goodbyes and headed back to Clermont. 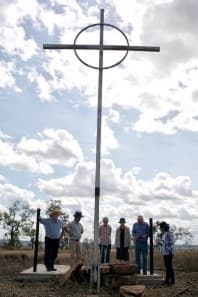