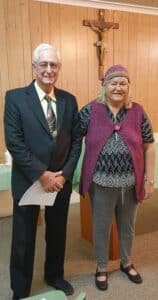 Brian and Merilyn Lloyd of Mary Immaculate Parish, Blackwater spend their spare time raising funds for missions. Brian recycles metals and Merilyn crochets shawls and rugs to be sold at local markets. Brian is a minister for communion and is a past member of the parish Core Team.  Now 82 years young, retiree Brian decided that he would start recycling in 2015 to fundraise $1,000 and was amazed to find that he had raised $1,720.90 in that first year.  Since 2015, Brian has raised $30,000.85. That’s $21,772.65 in scrap metal and since 2018, $8228.20 through Containers for Change. Before Containers for Change started in 2018, aluminium cans raised 85c/kg as scrap; but with containers for change they now raise about $5.00/kg. One year, with Merilyn’s $300 raised from crocheting, they raised $7,000.

Brian has everything organised at home for his recycling and can tell you how much the components in each bin will bring. There are bins for copper, glass, brass, air conditioner radiators, fridge compressors, and more. When there is enough for a load, Brian transports his recycling and old car batteries 200kms to Rockhampton to the scrap metal dealer using the trailer with a lifting arm their children gave Brian one Christmas to make his life easier.

Brian and Merilyn are very modest about their achievements as a team and have allowed their story to be told in the hope that others out there with time on their hands can make a difference where it’s needed.