In Memory of Patrick George Ogden

The recent death of Pat Ogden in Barcaldine saw the passing of a western icon.

Pat was born and died in Barcaldine, never lived anywhere else during his life, yet his death was mourned by people across Australia.

Coming from a family of ten, his father a shearer, growing up in the depression and years of the Second World War, like many of his era, Pat knew from an early age what it meant to struggle. At the age of 14, Pat on his own, boarded a train in Barcaldine for Gladstone.  He was told on arrival to go to the parish priest who would arrange boarding for him with a family in the parish.

It was this employment that put him in touch with the Australian Labor Party and the role of unions.   This was a passion for Pat for the rest of his life.

At his death, Pat’s family has been contacted by the leader of the Opposition, Anthony Albanese;  the Premier, Annastacia Palaszczuk;  the Governor of Western Australia, Kim Beasley,  as well as many sitting and former members of Parliament from both the Labor and Coalition sides of politics.

In Barcaldine, for many years, Pat was the unofficial custodian of the Tree of Knowledge.  It was under this tree in 1891 that unionists gathered in what we now know as The Shearers Strike and from that movement the Australian Labor Party later emerged. Pat was very active to ensure this part of Australian history would never be forgotten and the monument there today is testament to that.

Barcaldine is the home of The Australian Workers Heritage Centre.  This Centre is now one of Outback Queensland’s premier tourist destinations and National Monument to the working men and women in Australia.  Pat was on the inaugural committee that lobbied Government and unions to have this project come to fruition.

Labor Day marches in Barcaldine attract people from across the country.  Whether they be Prime Ministers, Premiers or family working class people,  they came and their point of contact was Pat Ogden who organised this for years.  Pat was a life member of the ALP. 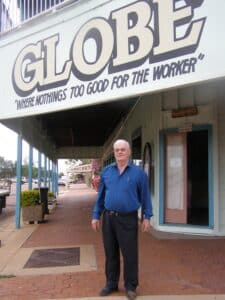 Apart from this political connection, Pat and his wife Clare, ran the Globe Hotel in Barcaldine for nearly 40 years.  The Globe was a focal point for many celebrations over the years and the Ogden family moulded many lasting friendships through the Globe.

Despite all the activity mentioned, Pat was a man of faith and active in the local parish.

The seed of his faith was planted in his family life and nourished by the Sisters of Mercy in the Convent School and the local parish throughout this whole life.  Pat had unwavering support of the priests in the parish and the Sisters of Mercy.  This faith, Pat and wife Clare shared with their children Jenny, Pauline, Dennis and Patrice.  Pat worshipped at the local parish all his life and for years was one of the Readers at Mass and Liturgies.

Pat was President and member of the local St Vincent de Paul conference for years and through his position at the hotel was able to help and support many travellers as they passed through town.  After leaving the Globe in later life: off his own bat, Pat would quietly go to the local hospital on Sunday morning and visit the patients

In July, Pat had an accident off his mobility scooter and a broken leg was the result.  The family will be forever grateful to the Qld Health staff at Barcaldine, Rockhampton and the RFDS for their care in the time up to his death.

Pat was cared for at home in his last days and all the family were with him there when he died.  The day before his death, Bishop Michael was passing through Barcaldine and called in and administered The Anointing of the Sick.

When interviewed by an ABC journalist under his beloved Tree of Knowledge a few years ago Pat was asked what qualities do you need to be a good publican.  Pat answered that you need the same as you do for life.  Be honest and sincere.

We remember Pat Ogden not for what he did in life:  but we remember him for who he was.

He was a man of faith, a family man who was always honest and sincere.