In Loving Memory of Paul Worthington 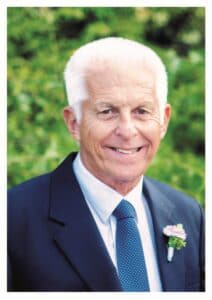 On the 19th July, 2022, many friends, family, work colleagues gathered round Colette Worthington and her five daughters, Marie-Therese, Michelle, Juleen, Lisa and Natasha to mourn the passing of her husband and their father, Paul Worthington, and to celebrate his life both here on earth and now as he entered into the embrace of the God he served so well throughout his life.

At the beginning of Mass, Fr Noel Milner spoke of how the elements of the baptismal liturgy have their fulfillment in the funeral liturgy. In their eulogy, Paul’s daughters showed so eloquently the faith that had sustained Paul in his rich and varied life but most especially in his love for Colette and his daughters.  They were the most precious gifts to him of a loving God.

Paul John Worthington was born at the Mater Hospital on the 2nd of April, 1946.  The youngest child and only boy of Art and May, he was deeply loved and spoilt by them and his older sisters, Kay and Arthea.

He lived in Rockhampton nearly all his life, until moving down the road and retiring in Yeppoon.  As a young man, he had a lively social life with many friends but he eventually tired of the aimless socialising and wanted to settle down.  Around this time he met Colette Connor.  Concerned about meeting the right woman, he prayed and later recounted,

‘I remember vividly kneeling at Mass, kneeling in the back row of St Mary’s Church praying the Our Father.  As I prayed, ‘thy will be done on earth’ I am thinking, ‘Your will’s not doing much for me, when will you find me someone?’…Almost immediately, I heard a response in my mind, “I already have.” This freaked me out.  As my prayers up to that point had been one way traffic.  Almost immediately this indecisive procrastinator made the best decision of my life – to marry that girl.’

They married soon after, and after fifty years of marriage, knew they had experienced God’s hand at work.

Similarly, when he and Colette welcomed their first daughter, his response was one of faith.  On holding Marie-Therese for the first time, he said, ‘As I held her for the first time and saw my own eyes looking back at me, a verse from Genesis echoed in my thoughts, “and God saw what he had made, and it was good.”

As four daughters followed, he was often asked if he was hoping for a boy.  He would simply say, as long as the child is happy and healthy, that’s all I ask.’  In his love for his two granddaughters, he continued to show his passionate love of life.  It was a proud moment when he helped Ava harvest her first pumpkin, which they had grown together.  Even with his granddaughter Thora, on the other side of the world, he created and kept a bond.

After leaving school, Paul worked initially for the Railways in various locations through Central Queensland. He then moved to the Electricity Board in its various incarnations. His daughters joked that while his workplace kept changing its name, he was still in the same building, only on a different floor.  When he started at CREB in 1970, he began studying Accountancy at night and becoming a certified CPA, he worked as an accountant.  He also studied and became a computer programmer.  In retirement these skills were of great use in his St Vincent de Paul work.  Within the workplace, he was very involved in the social life with his peers, fulfilling various roles, often being Santa at their Christmas Parties.

Through their involvement in their parish and their faith, Paul and Colette were part of loving community of families that nurtured, supported and cared for each other.  They met Karen and Lyal Page through the Majellan group, and Ros and Bruce McCarthy who worked with them in Engaged Encounter, and many others.   Holy Family community must have surely missed them when they came to Yeppoon and began the next chapter of their life.

Initially Paul and Colette joined the St Vincent de Paul Society at Holy Family and they maintained ties after moving to Yeppoon.  He became Diocesan Vice President, Treasurer of the Rockhampton Regional Council, and member of the St Camillus Support Group and was a member of the Sacred Heart Conference.  He worked with implementation of CARE, an IT welfare programme that integrates and streamlines the giving of support to those in need.  The online outreach was certainly needed throughout Covid.  Paul also fielded calls from the remote areas and ensured support where needed.

To the delight of Sr Dolores rsm, Paul became a member of the Prison Chaplaincy at the Capricornia Correctional Centre.  This work was yet another vocation for him. On this work, he said, ‘Every day now I pray and reflect because I don’t know what life will throw at me with those we help or what situation I’ll encounter.  As I travel out to the jail, I pray to the Holy Spirit to give me wisdom, to help me find and minister to the most needy on the day.’  At his funeral, I sat next to one of the prison guards, who told me how deeply distressed a number of the prisoners were at his passing.

Paul also helped in the Ministry of Communion to the elderly, conducting one of the services at an Aged Care Facility in the parish.  As well, he DJ’ed for Keppel FM.

So much more could be said of Paul.  It seems his outreach was far wider than many could have imagined.  I hardly knew him but on the occasions when we spoke, I was struck by his buoyant spirit and quiet joy.  Paul loved richly, deeply and well.  Our prayers and condolences go to Colette and her family.  He has now entered into the fulness of God’s love.

The Eulogy prepared by his daughters can be read here.

Eulogy for Paul Worthington by his daughters.

An interview he gave on his prison ministry can be viewed here.