In Loving Memory of Briona McKone

In my experience, parish secretaries are the quiet achievers in the Catholic Church.  In any given day they can fulfill a variety of roles.  While employed to do administration, they can support the grieving, advise on baptisms, direct people to schools and just have a chat with a member of the parish who turns up at the door.  Briona McKone, who served the Parish of the Capricorn Coast for over ten years in this role, was amongst the best of these.  She was a large-hearted, passionate, competent, humble woman.  Sadly, she passed away, far too young, after a short battle with cancer.  Many were heart broken.  These words that follow are based on the eulogies given by her husband Phil and her son David, and the recollections of some of the Capricorn Coast parishioners.

Born in Sydney in 1964 to Pam and Barry Wright, most of her childhood was in eastern highlands of Papua New Guinea where her mother and father were hospital workers.  After independence, her family moved back to Australia and she attended high school in Maleny.  She joined the Qld Public Service and after a few years did the European Trip which was like a rite of passage for her generation.  While overseas, she worked as a nanny and has remained close to the family she cared for. 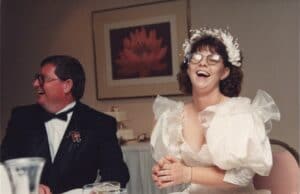 On her return, she took up work at the Stanwell Pump Station and Pipeline Project in Rockhampton, where she met the love of her life, Phil McKone, through social functions for their work.  Their common values and outlook in life aligned and they married in 1993.  With Phil’s job they moved to Biloela where were born the other passions of her life – her two sons, Robert, in 1994, and David in 1996. While born Anglican, she became a Catholic to support Phil and her sons in their religion.  She entered passionately into her son’s education and was an advocate and support to them in their diverse interests.

In their eulogies, Phil and David shared many of the likes and dislikes, fears and joy and what comes across strongly in reading them was the ability of this woman to enter into the moment, to enjoy it fully and to share that life with others. While small of stature, Briona had a laugh that filled the hearts of those around her and invited them to enter into her joy, with her delighted cry of ‘Wacky Doo”!

She was a woman of strong opinion but one felt better for a conversation with her, even if your opinions didn’t align.  She listened, was respectful and was empathic.

She was a hard worker doing many more hours for the parish than her job description listed.  One parishioner would note to me that emails she sent came with the time of 10.30 pm on them.  Within the parish this generosity was noticed and noted by many, but we wouldn’t have really been able to comment on it.  She would have seen it as just getting on with what needed to be done.

In his homily at her Memorial Mass, Fr Bryan Hanifin, parish priest when she was secretary, spoke of her organising skills, her order and how she was not easily disturbed when working to bring a plan to fruition.  But far more importantly, he spoke of how she revealed the face of Jesus to those who came to the door, being compassionate, generous and accepting.

When she was diagnosed with cancer, she knew immediately the implications and she and Phil faced her death with a calm, deep faith.  They sold their home in Yeppoon and moved south to be closer to her sons and her parents and sister.  In her strength, she supported these in the grief she knew would come.  As she grew weaker, Phil shared with her the many messages that were sent from her friends on the Coast.  One read, ‘I wanted to say that the saying goes that it’s not what a person says or does but how they made you feel in life that is our true measure.  Briona, you always made me feel loved, validated, heard and respected.  You are an extraordinary person and I am richer for our many conversations, be it regarding kids, life or liturgy debacles!  Thank you for being your beautiful big-hearted self.’

She passed away peacefully on the 7th of January.  Her funeral was held at St Peter’s Church Caboolture.  A Memorial Mass was held at Sacred Heart Parish when her ashes were interred in the parish columbarium.  May she enter into the fullness of God’s life and love.