On Saturday night 18th June 2022 ,  Coong Hy and his wife Cu Ngan – former Refugees from Vietnam  were welcomed into the Catholic Faith through the RCIA at St Mary’s Parish South Mackay. 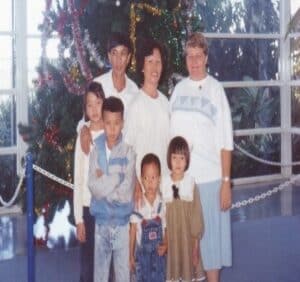 From 1992-2003 I resettled Refugees here in Mackay on behalf of the former Rockhampton Congregation through the Community Refugee Settlement Scheme (CRSS).   The Refugees  were from Vietnam, Somalia, Croatia, Serbia and Bosnia.  Coong Hy and his wife Cu Ngan and their four children, Van (9), An (8), Quynh(6) and Tam(5) arrived in December 1994 and were resettled in South Mackay in a house owned by the former Rockhampton Congregation.  The children were enrolled at St Mary’s Primary School and went on later to Mercy College and St Patrick’s College Mackay, thanks to the generosity of the Principals and the Rocky Mercies. The family had escaped from Vietnam which was under Communist rule in 1990 and crossed the Chinese border and together with 23 others purchased a boat and sailed to Hong Kong.  They were taken to a Detention Centre in Hong Kong and were there four years while waiting for their claim for Refugee Status to be processed.   In about September 1994 after receiving their Refugee Status, they were sent to an open camp in the Philippines for four months while waiting to see which country was going to accept them.   They chose Australia and were told they were going to Queensland to a city called Mackay and that they would be met and looked after.   How uncertain this must have been for them all.   On 9th December 1994 the Hy family arrived at Mackay airport and were welcomed by the Mackay Sisters, Denise, Lila, and  Maria Jean.

After completing  their 500 hours of compulsory English at TAFE College Mackay, Coong was able to find work as a kitchen hand in a Chinese take away kitchen for a few years.  Around 1998 a new computer business was opened here in Mackay and was run by a Chinese man and Coong was asked if he would like to come and learn about computers. He learnt from Tony all things related to computers.   (I had my own personal IT person!!!).  Coong worked with Tony for about 10 years until the business closed.  He was able to find employment,  through help from me,  at the Mackay Mater Hospital in the housekeeping department as a cleaner, where he still works five days a week.  Cu remained at home as homemaker and did some house cleaning to boost the budget.    Cu is an avid gardener and loves giving her plants away.

I am often invited to join in family gatherings, e.g., Christmas, Chinese New Year, Weddings or a meal when any of the children come home to Mackay.    All four children have completed university or tertiary education and  have careers: Business, Supervisor in Mining Company –  qualified Boiler maker, Pharmacist and a Civil Engineer.   All four children have married over the past five years or so and have given Coong and Cu one grand-daughter and six grandsons – three of whom were born this year.  The two boys live in Mackay and the two girls live in Brisbane and Gold Coast.

At Christmas time while visiting me Coong said he wanted to ask me something.  To my surprise it was that he and Cu would like to become Catholics as many  people who have helped them over the years have been Catholic Sisters in the Philippines and here in Mackay.  It was too late for them to go through the RCIA for Easter, so they began their preparation in St Mary’s Parish at the end of January and met weekly with the catechist and her assistant and myself when I could be there. Jan was able to find a way of translating all the lessons into Vietnamese on the computer and I was able to get them a Bible in Vietnamese which made the lessons much easier for them to follow. 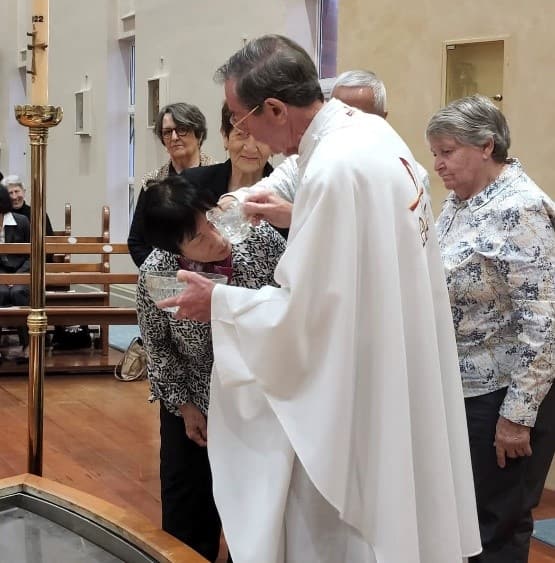 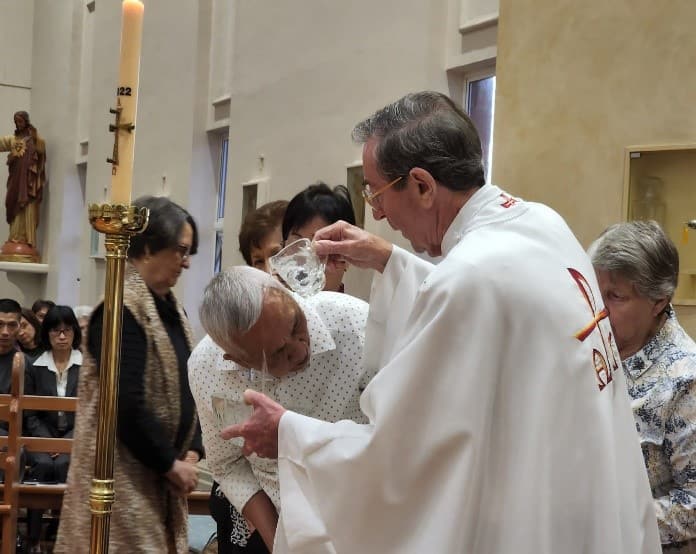 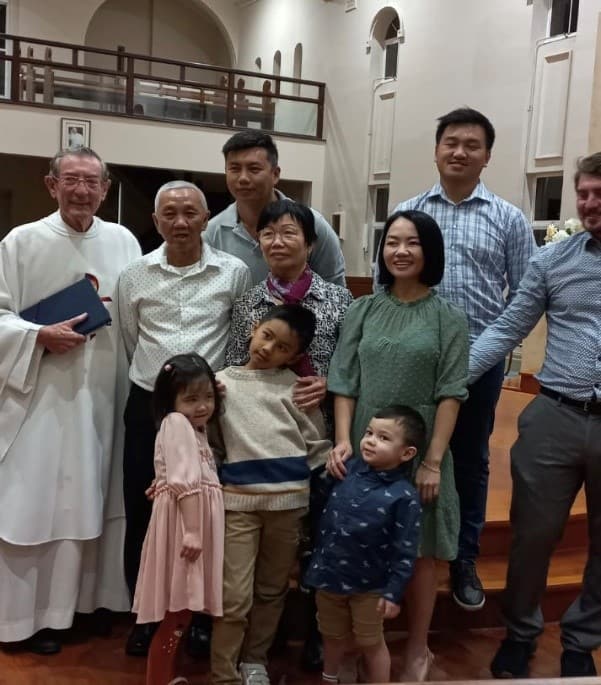 Fr Pat Mooney was celebrant at the Mass on June 18th at St Mary’s South Mackay and he began his homily with a story about a Vietnamese Priest who later became a Cardinal and around 1990 was imprisoned under Communist Rule,  because of his Catholic Faith.  While in prison for a very long time he was able to somehow smuggle some breads and wine into the prison and was able to celebrate Eucharist in his prison cell by using the palm of his hand as the Chalice. He only passed away in Vietnam a few years ago.   Pat tied this story in with the Feast of Corpus Christi and also with the reception of the Sacraments of Initiation of Coong and Cu.  Fr Pat had asked me to write a story for him to share with the Sisters of Mercy.  When Pat finished his homily, the congregation broke into  spontaneous applause. It was a very moving moment for Coong and Cu, three of their four children and three of their six grandchildren.  Coong expressed his special thanks to the Sisters of Mercy of Rockhampton  for helping them to settle here in Mackay and for helping them in giving a good education to their four children, who are now all married and working in various careers after going to University.  Already there is one boy from the next generation at St Mary’s School, South Mackay with another starting Prep next year.   This is truly  a Good News story for us all.   Saturday night was very special  and joyous, and I am sure just the beginning of a very committed faith life into the future for Coong and Cu.