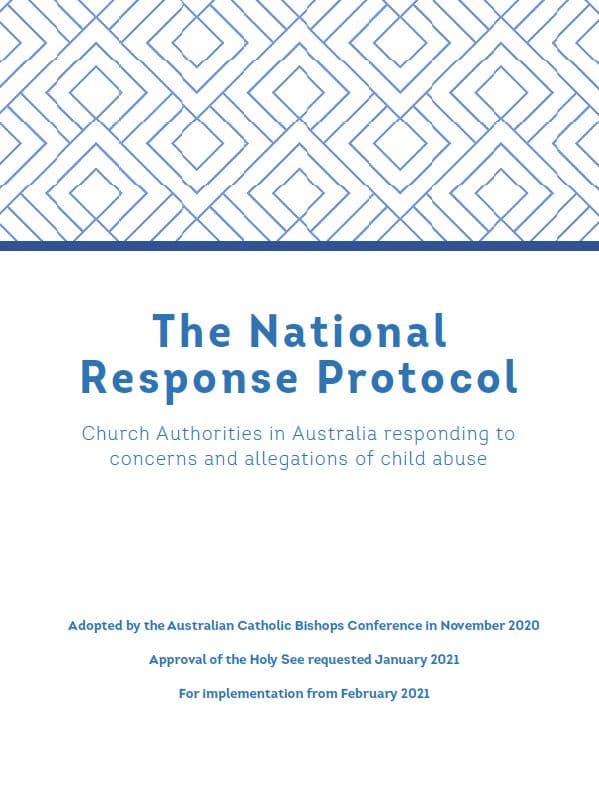 A new protocol to be introduced next week provides a framework for Catholic entities across Australia to respond consistently to people raising concerns or allegations of child sexual abuse.

The National Response Protocol, which was adopted by the Australian Catholic Bishops Conference at its November 2020 plenary meeting, is the product of two years of work and widespread consultation within and beyond the Church.

That consultation included engagement with victims and survivors and their advocates.

“The Church continues to work hard to strengthen the safeguards that have been put in place in recent years,” Bishops Conference president Archbishop Mark Coleridge said.

“The adoption and implementation of the National Response Protocol is an important step forward, and we thank those who have brought this thorough process to completion.”

In preparing the National Response Protocol, various state and territory regulatory and legislative requirements, across different sectors and settings, were considered. The NRP sets a “national benchmark against which local policies and procedures should be aligned”.

Archbishop Coleridge said that as well as outlining principles and processes for responding to concerns and allegations of abuse, whether historical or contemporary, the protocol also offers guidance on how to engage with those affected by abuse.

“Drawing on wisdom from the Royal Commission, from governments and universities, and from the experience of the Church overseas, the new protocol offers a trauma-informed approach to supporting those who have been betrayed in Church settings,” he said.

“The protocol demands an approach from the Church that is compassionate and just. It also insists upon respect for each individual’s personal story and circumstances.”

The implementation of the National Response Protocol from February 1 will mean that Towards Healing and The Melbourne Response will be phased out.

“Pioneering in some ways when set up in the 1990s, the two earlier protocols have been much criticised, in large part because of inconsistent or incomplete application,” Archbishop Coleridge explained.

“One of the strengths of the new protocol is that it provides a single national framework, which will ensure a consistent approach to the handling of concerns and allegations.”

The National Response Protocol will be monitored regularly to allow for ongoing refinement and improvement. It will be sent to the Holy See for approval.

The National Response Protocol is available at: www.catholic.org.au/nationalresponseprotocol