The Catholic Diocese of Rockhampton has issued its 2021 Modern Slavery Statement.

In January 2019 the Australian Government passed the Modern Slavery Act 2018 based on similar legislation in the UK. The Act requires entities based or operating in Australia, with annual consolidated revenue of more than $100 million, to report annually on the risks of modern slavery in their operations and supply chains, and actions they have taken to address those risks. The Catholic Diocese of Rockhampton (including Catholic Education, CatholicCare and Parishes) is subject to this legislation.

All Australian companies and not-for-profits (‘entities’) captured by the Act must prepare an annual Modern Slavery Statement. 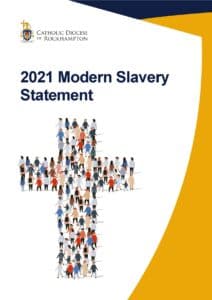